"Hey, have you seen all the swans in the fields down 190th Street?" Randy Trudell asked me when he stopped by to give me an estimate on a tree removal job at the Audubon Center.

"I saw them just now when I drove up here,"  Randy said.

Soon as we were finished looking at the trees, I got in my car and drove west on 190th Street towards US 75.  I didn't get more than a mile when my eye caught a half dozen big birds flying, like moths attracted to a street light - around in a circle over the CRP.

The sky was overcast.  It had been raining all morning.  So the light was not so good for photos.  I got out of the car and took a picture anyway.

I wondered when we'd start seeing Short-eared Owls again, but I didn't expect it soon - and so early in the day.

Seeing them reminded me of an unforgettable experience I'd had years ago - watching these birds do their breeding display - barking like dogs and "wing-clapping" at dusk.  Maybe we'll get lucky and see the "show" here in Warren this spring.

After the owls flew out of view, I got back in the car and continued down 190th looking for the field full of swans.

I didn't have much further to go.  I could see hundreds of them in the farm field off to the north at the intersection of 190th and 300th Ave. 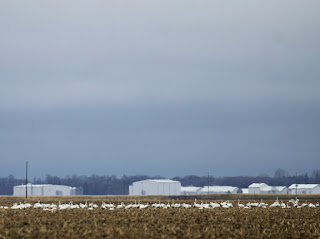 But they were skiddish - taking off even though I was driving ever-so-slowly.

I've seen (and heard) hundreds of Tundra Swans whistling on the Mississippi River near Nelson, Wisconsin - but never did I expect to see them in Warren, Minnesota.


The best time to see them (and the thousands of other waterfowl at the impoundment) is dawn or dusk... and if you're lucky - midday in the fields south of Warren.
Posted by Agassiz Audubon Society at 9:01 PM