The idea for the Community Nest Watch Project was sparked when when I met with Nathan Wozniak last September.  I was looking for ways to connect students to the Audubon Center, and I needed to fix or replace our seed shed (the doors had started to rot).  Nathan was looking for community service projects for his Tech Ed students at Warren-Alvarado-Oslo High School. 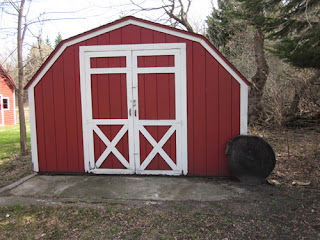 Nathan came out to the Audubon Center to take a look at the shed and we talked about that and other projects.   I mentioned that we also had a housing problem.  Most of the houses at the Audubon Center are in need of repair.  After decades of heavy use, they needed to be renovated - and in many cases, replaced.

“This is a perfect project for our 8th graders,” Wozniak said.  “We can start in November.”
Agassiz Audubon obtained funding for the building supplies from Northwest Minnesota Foundation and Audubon Minnesota.   Argyle Building Center delivered the lumber (western red cedar) and adhesives to the school.  I supplied the schematics.
Nathan called it a lesson in mass production.
I called it a citizen-science conservation project.
The fifteen Tech Ed students had another name for it:  FUN!
Their first challenge:  how to assemble 50 houses for Eastern Bluebirds.
Their solution:   create an assembly line - and fabricate the tools and templates for mass production.
The class will have the boxes finished by the end of the week.

In April, we'll be looking for volunteers to help install the nest boxes - in downtown Warren, at the Audubon Center, along the flood control diversion east of Warren and at the Agassiz Valley flood control impoundment southeast of Warren.
Want to help?

You don't need to know anything about birds.  I'll show you what you need to do.  And I'll be presenting programs on nesting birds at the Northwest Regional Libraries, at Senior Centers, at Scout and 4-H meetings and at schools.  Click here to look at the schedule.

It's a great project for families, kids and adults. 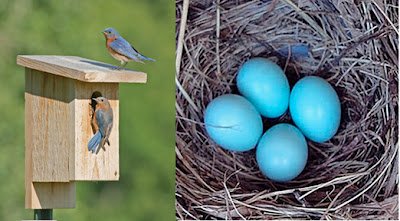 If you’d like to help install and monitor the boxes, call Agassiz Audubon Society 218-745-5663 or send me an email:  AgassizAudubon@gmail.com.

If you’d like to sponsor a nest box, a donation of $10 or more will help us cover the cost of the project.  Please send donations to Agassiz Audubon (27391 190th Street NW,  Warren  MN  56762) or donate on line at  http://givemn.razoo.com/story/Bluebirds

Posted by Agassiz Audubon Society at 7:11 PM No comments:

I got up well before dawn and went out to look - and listen - for the Great Horned Owl that's been hanging around the Audubon Center since November. 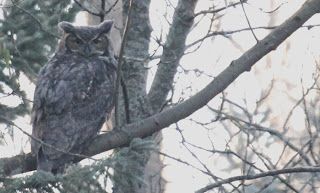 I didn't see anything stirring.  I looked at the thermometer - what happened to the balmy weather we had last week? 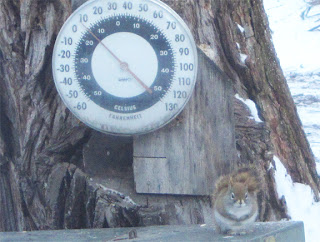 The first sound I heard was "moo mooo  mooo" - the mournful call of one of my neighbor's cows.  Then the scolding chatter of a little red squirrel.

I stood still and listed again.

Minutes later I heard what I had been hoping for:  the "who who who whoooo..."  of our resident Great Horned Owl, calling from a nearby perch.  The "official" first bird of the 2011 Warren Christmas Bird Count.

I went back home, brewed a pot of coffee and checked the weather forecast.

Great weather - relatively speaking (we had a blizzard warning on New Year's Eve).

After I finished my cup of coffee, I walked out to 190th Street to see if the road had been plowed.  Not yet.

Chris Anderson came over to the driveway Saturday night, but he said getting to the Audubon Center was a challenge (he slid into a ditch).  He said the main roads were icy and the Township roads had not seen a plow.   Should I give it a try?

The sun's out.  There's not a lot of snow.  Maybe it's not so bad.  I'll drive around the section and see for myself.  If I slip into a ditch, I'll be close enough that I can walk home.

Next challenge:  getting from my driveway a mile and a half to the paved county road.   I opened the garage door, unplugged the block heater on my Honda CRV and started the car, no problem.  I let it run while went back indoors to get my gear.

A little slippery, but the CRV kicked in to all-wheel drive and I made it out to Polk Co. 68 where I saw what would be my first of nearly a dozen Rough-legged Hawks for the day. 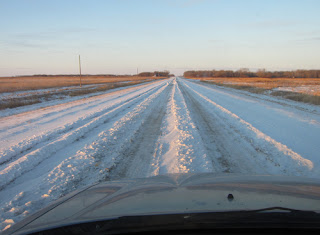 As it turned out, this would be the best of the township roads - and a day of slow driving.


Then I headed north to MN Hwy 1.  As I passed the Agassiz flood control impoundment, I spotted a handful of Sharp-tailed Grouse kicking up snow.  Further north at the intersection of Hwy 1 and Marshall County 26, a huge flock of Snow Buntings blew up into the sky, then floated back to the roadside where they went back to picking at grass uncovered by the wind whipping the snow from the shoulder of the road.


Because the rural roads were so slippery, I headed east to Warren and drove up and down the in-town streets. I spotted lots of birdfeeders, but they were all empty (except the feeding station at the Godel Library).  No seed = no birds.   I spotted several crab apple trees full of fruits.  But no American Robins and no waxwings.  Nada.

I checked out the cemeteries, golf course and fairgrounds.  Not a creature was stirring.

Hm... I headed over to CHS grain and drove around until I stirred up a small flock of Rock Pigeons.   Then I drove west to check out the sewage lagoons.  Nothing.


North to towards Argyle,  I caught up with another flock of Snow Buntings on US 75 and a couple of pigeons.

Back down US 75 towards Angus, I spotted a small flock of what appeared to be sparrows at the granary on 190th Street by the railroad tracks (aka Roon).  I pulled off the highway to take a closer look.  They turned out to be much better than sparrows:  Common Redpolls.


I drove down to Angus then back towards the official "count circle" via 290th Ave.,  slip-sliding my way north.


A couple of Rough-legged Hawks and several Common Ravens.   When I hit Polk County 67, a gray bird with a white rump flew over my car. 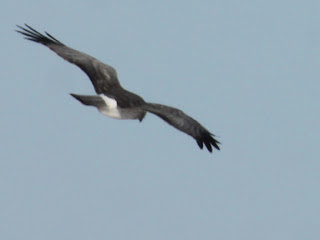 I didn't expect to see a male Harrier today.


Inspired, I headed over to the Warren Airport to look for Snowy Owls.  More ravens, but no owls.

After 8 hours and 72 miles, I decided to call it a day.  On the way home, I lamented that I hadn't seen a single Black-billed Magpie.   Then, wouldn't you know, as I was turning the corner of 190th Street I spotted two magpies hanging out with a flock of ravens - just a mile east of my driveway.

After dinner, my neighbor, Faith Rud called to tell me her husband Larry spotted not one, but 2 Short-eared Owls when he drove by the Audubon Center on 190th Street at dusk.   A perfect ending to a great day of birding in Northwestern Minnesota!

Check our Christmas Bird Count page for the details.
Posted by Agassiz Audubon Society at 9:00 PM No comments:

Email ThisBlogThis!Share to TwitterShare to FacebookShare to Pinterest
Labels: CBC
Newer Posts Older Posts Home
Subscribe to: Posts (Atom)
Passion is good for you.
Studies show
following your passion
can lead to a longer,
healthier and more fulfilling life.